In the 16th and 17th centuries, the fortress-city of Fasil Ghebbi was the residence of the Ethiopian emperor Fasilides and his successors. Surrounded by a 900-m-long wall, the city contains palaces, churches, monasteries and unique public and private buildings marked by Hindu and Arab influences, subsequently transformed by the Baroque style brought to Gondar by the Jesuit missionaries. 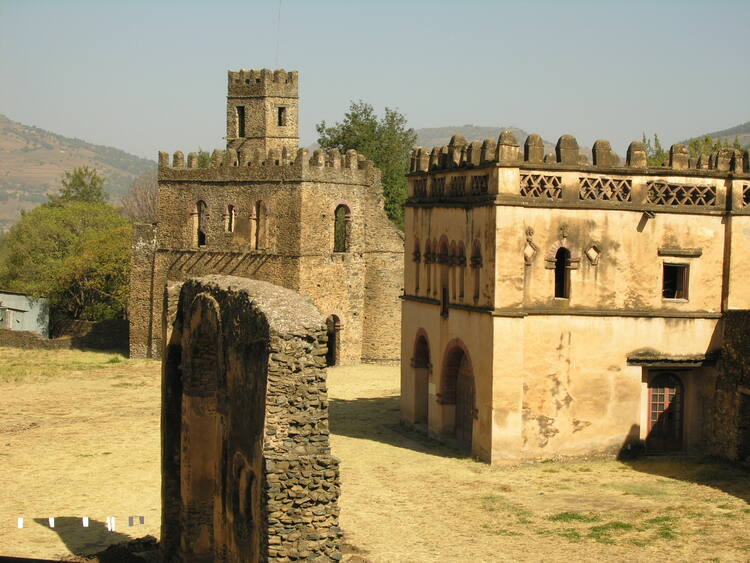 Fasil Ghebbi is located in the Amhara National Regional State, in North Gondar Administrative Zone of the Federal Democratic Republic of Ethiopia. The serial property consists of eight components. Within the Fasil Ghebbi palace compound are: the Castle of Emperor Fasilidas, the Castle of Emperor Iyasu, the Library of Tzadich Yohannes; the Chancellery of Tzadich Yohannes; the Castle of Emperor David, the Palace of Mentuab and Banqueting Hall of the Emperor Bekaffa. The remaining seven components are located in and around the city of Gondar: the Debre Berhan Selassie (Monastery and church); the Bath of Fasilidas; Kiddush Yohannes; Qusquam (Monastery and Church); Thermal Area; the Sosinios (also known as Maryam Ghemb); the Gorgora (Monastery and Church) and the Palace of Guzara.

Between the thirteenth and seventeenth centuries, Ethiopian rulers moved their royal camps frequently. King Fasil (Fasilidas) settled in Gondar and established it as a permanent capital in 1636. Before its decline in the late eighteenth century, the royal court had developed from a camp into a fortified compound called Fasil Ghebbi, consisting of six major building complexes and other ancillary buildings, surrounded by a wall 900 metres long, with twelve entrances and three bridges.

The fortress city functioned as the centre of the Ethiopian government until 1864. It has some twenty palaces, royal buildings, highly decorated churches, monasteries and unique public and private buildings, transformed by the Baroque style brought to Gondar by the Jesuit missionaries. The main castle has huge towers and looming battlemented walls, resembling a piece of medieval Europe transposed to Ethiopia. Beyond the confines of the city to the north-west by the Qaha River, there is a two-storey pavilion of a bathing palace associated to Emperor Fasilidas. The building is a two-storey battlemented structure situated within and on one side of a rectangular pool of water which was supplied by a canal from the nearby river. The bathing pavilion itself stands on pier arches, and contains several rooms reached by a stone bridge, part of which could be raised for defence. Subsequent rulers, such as Iyasu the Great, continued building, improving the techniques and architectural style and expanded to the hills north-west of the city centre, in the area known as Qusquam.

Fasil Ghebbi and the other remains in Gondar city demonstrate a remarkable interface between internal and external cultures, with cultural elements related to Ethiopian Orthodox Church,Ethiopian Jews and Muslims. This relationship is expressed not only through the architecture of the sites but also through the handicrafts, painting, literature and music that flourished in the seventeenth and eighteenth centuries.

After its decline in the 19th century, the city of Gondar continued to be an important commercial and transport hub for northwest Ethiopia. Some of the monuments still retain their original spiritual function and the surrounding landscape has significant cultural importance for the local inhabitants.

Criterion (ii): The characteristics of the style of “the Gondarian Period” appeared from the beginning of the 17th century in the capital, Gondar, and significantly influenced the development of Ethiopian architecture for over 200 years.

Criterion (iii): Fasil Ghebbi, Qusquam and other sites bear an exceptional testimony of the modern era of Ethiopian civilization on the highlands, north of Lake Tana, from the 16th to 18th centuries.

The maps for all the components of the serial property have yet to be prepared and boundaries for the property and buffer zones remain to be delineated. However, several of the component sites, including Fasil Ghebbi, are walled and these provide natural boundaries. These enclosed sites retain all the important attributes that substantiate the Outstanding Universal Value of the property.

Although there are general decay conditions, related to both natural and cultural factors, including lack of maintenance and inadequate past interventions, the components of the property still maintain the necessary conditions of integrity.

A sustained programme for conservation and maintenance is still needed to improve conditions at the overall property and prevent further erosion of the integrity of the property. Additionally, means to address the existing conflicts to balance the conservation of the historic value of the property with the need to improve the traditional liturgical functions have yet to be implemented. Definition and enforcement of regulatory measures for the management of the buffer zones are also needed to preserve the settings of the component parts of the property.

Most of the monuments have preserved their authenticity and remain in an overall good state of conservation. But, inappropriate conservation interventions, carried out between 1930 and 1936, using cement and reinforced concrete caused damage to the original materials and impacted the authenticity of the intervened components. The situation was partially reversed with the restoration works carried out by UNESCO in the 1970s, which replaced the cement and concrete work with the original mixes of lime mortar as well as with subsequent major conservation programmes implemented since 1990. Currently conservation activities at the property seek to reverse the prior impacts so as to maintain the authenticity of the property and focus on the use of original techniques and materials. To prevent future impacts, on the authenticity of the component parts of the property, guidelines and interventions for historic buildings need to be defined and enforced through a sustained conservation and maintenance action plan.

Ethiopian Law 1958 (EC) ‘Antiquities Administration’ provides the national legislative background for the protection and preservation of the Ethiopian cultural heritage. No special legal framework is provided to protect Fasil Ghebbi and the other component parts of the property, except the general law, Proclamation No. 209/2000, the revised proclamation for Research and Conservation of Cultural Heritage which also establishes ARCCH as the institution in charge.

ARCCH and the Regional and Zonal Culture, Tourism and Information Bureaus are responsible for the management. Monuments that are used for religious services are under the direct responsibility of the Ethiopian Orthodox Church. Consequently, the management of the property falls at all the three levels - the property, the region, and the central administration, although the day-to-day management is the responsibility of the property at the local level. The Amhara National Regional State is responsible for the recurrent budget that goes to salaries and regular expenditures. The ARCCH is responsible for capital budget that goes for development works such as restoration and preservations. Additional sources of income are derived from tourist fees and these go to Government treasury and the Ethiopian Orthodox Church.

In spite of the existence of these arrangements, a more efficient decision-making structure is needed, with clearly defined roles and responsibilities at the national, regional and local levels, as well as with established mechanisms to promote the engagement of stakeholders in the definition and implementation of actions geared toward the management, conservation, protection and use of the component parts of the property. The revised structure needs to be fully supported by legal provisions to ensure adequate financial and human resources for its efficient and sustained operation, including considerations for multilateral and bilateral cooperation projects.

The management system needs to be clearly set out in an appropriate Management Plan for the serial property, including the definition of policies to bring about the integrated sustainable development and adequate use of the property. The Management Plan needs to be articulated with other planning tools, such as Gondar’s Master Plan, to ensure the conservation of the attributes that sustain the Outstanding Universal Value of the property. Integrated annual plans need also to be implemented in a sustained manner to address the pending needs for inventory, archaeological research, conservation, restoration and interpretation.

An initial assessment of the Historic Importance of Site of the Thermal Bath Site, Gonder

Training in understanding the historic plasters of Ethiopia